Linda J. Parker
Aids activity
Comments Off on Earth Matters: what does it mean for a species to be rare?

Earth Matters: what does it mean for a species to be rare? 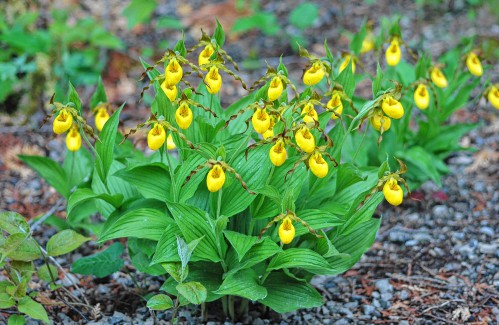 Several summers ago, my wife and I visited the Bruce Peninsula in Ontario, Canada in search of wildflowers.

We were well rewarded with fields of prairie smoke flowers and forest floors of white trillium, and then saw something quite unexpected. Along the road to a campground in the Bruce Peninsula National Park, our gaze caught on to large, abundant clumps of striking yellow flowers along the road – slipper orchids!

This same species is rare and endangered here in Massachusetts, and I had seen a few of them before at one of their 12 reported locations in the Commonwealth, but what was going to turn this wonderful exotic plant into essentially a roadside weed?

I should have been less surprised. The Bruce Peninsula is a top destination for orchid lovers, with 40 species and an annual festival. Apparently cutting roads through the dense spruce forest creates light holes and wet ditches that mimic disturbances in the local sandy, calcareous, and marshy soils caused by wind and storms that typically provide new sites for colonization orchids.

But beyond the elegant beauty and surprising proliferation, this sight recalled a long-standing discussion in ecology – what does it mean for a plant species to be rare? In fact, on any given plot of land, most species are in low abundance. Even when the number of species is high, most of the biomass is usually found in a few dominant species.

The total population of a rare plant or animal may have only a few individuals, or be limited to a narrow geographic area, or both. Some rare species are scattered over a wide area. Sometimes the plants are plentiful, like the yellow orchids in Ontario, but they are crammed into a tiny area, perhaps a single county or peninsula. The rarest plants have both a narrow range and few individuals.

Time and distance also play a role in rarity, as ecologists Daniel Simberloff and EO Wilson explained in their theory of island biogeography in the late 1960s. Small populations in restricted areas (“islands” ) are threatened with local extinction due to perils such as severe weather, biological invaders, and human disturbance.

If there are other populations of a threatened plant or animal nearby, a site of local extinction may be recolonized, the rate of which depends on distance, species mobility, and the size of the site. ‘Isle. Isolated patches of unusual soils, such as limestone outcrops or bogs, can act as islands.

Dispersal is far in some plants, short and random in others. Thus, the abundance of species is variable in space and time, even in the absence of human activity, and plants such as yellow orchids, although very rare in a location, can become abundant as conditions change.

But what about the ecological importance and function of rare species? If there are very few individuals, could their impact on the local ecology be small and therefore the local loss of this species not so disruptive? In some cases, we can identify a key role for a species with low total biomass or population size.

For example, through intensive plant and soil sampling over many years in the Hubbard Brook Experimental Forest in New Hampshire, researchers have discovered that perennial spring mayflies, such as the trout lily, serve an ecosystem function crucial. In the spring, the snowmelt causes a rapid evacuation of calcium, an important nutrient for plants in small quantities in the acid soils of the White Mountains, in the waterways.

The trout lily is one of the few plant species to actively grow and absorb calcium at this critical time, thereby storing it to be released and used by other plants later in the season as its leaves die.

In animal systems, large carnivores provide another example: they are often few and few in number but high impact, and their local extinction has severe consequences. Wolves and cats that were once major factors in controlling deer herds in New England have disappeared and deer populations are exploding, damaging forest seedlings and home landscapes and increasing the risk of deer-borne diseases. ticks.

But in most cases, we simply don’t know how rare species fit into the web of life in a particular community. No matter how much research we do, how much we incorporate traditional knowledge, how much we monitor, for the most part we have to admit that we live and act in complete ignorance of the detailed life of the plants and animals around us.

We like to think we know – we’re human, after all. But there is just such to know, so many interactions to take into account. The Endangered Species Act 1973, which aims to conserve and protect endangered and threatened species and their habitats, is an acknowledgment of our limited knowledge and a truly meaningful implementation of the precautionary principle: first, do no harm.

We don’t really know, and we may not know the full ecological value of the snail darter, the desert pupfish, the piping plover, the cicada. But it is imperative that we use the knowledge we have to make thoughtful and careful choices about how we use our forests, fields, waterways and oceans.

Thus, searching the landscape for rare species continues to be an important “green” activity. I love to hunt (but never gather) rare ferns and orchids. Not only does it allow us the very human pleasure of discovery and enjoyment, but it also contributes to the effort to “save the pieces” for future generations.