Linda J. Parker
Aids activity
Comments Off on Gay blood does not exist

Gay blood does not exist 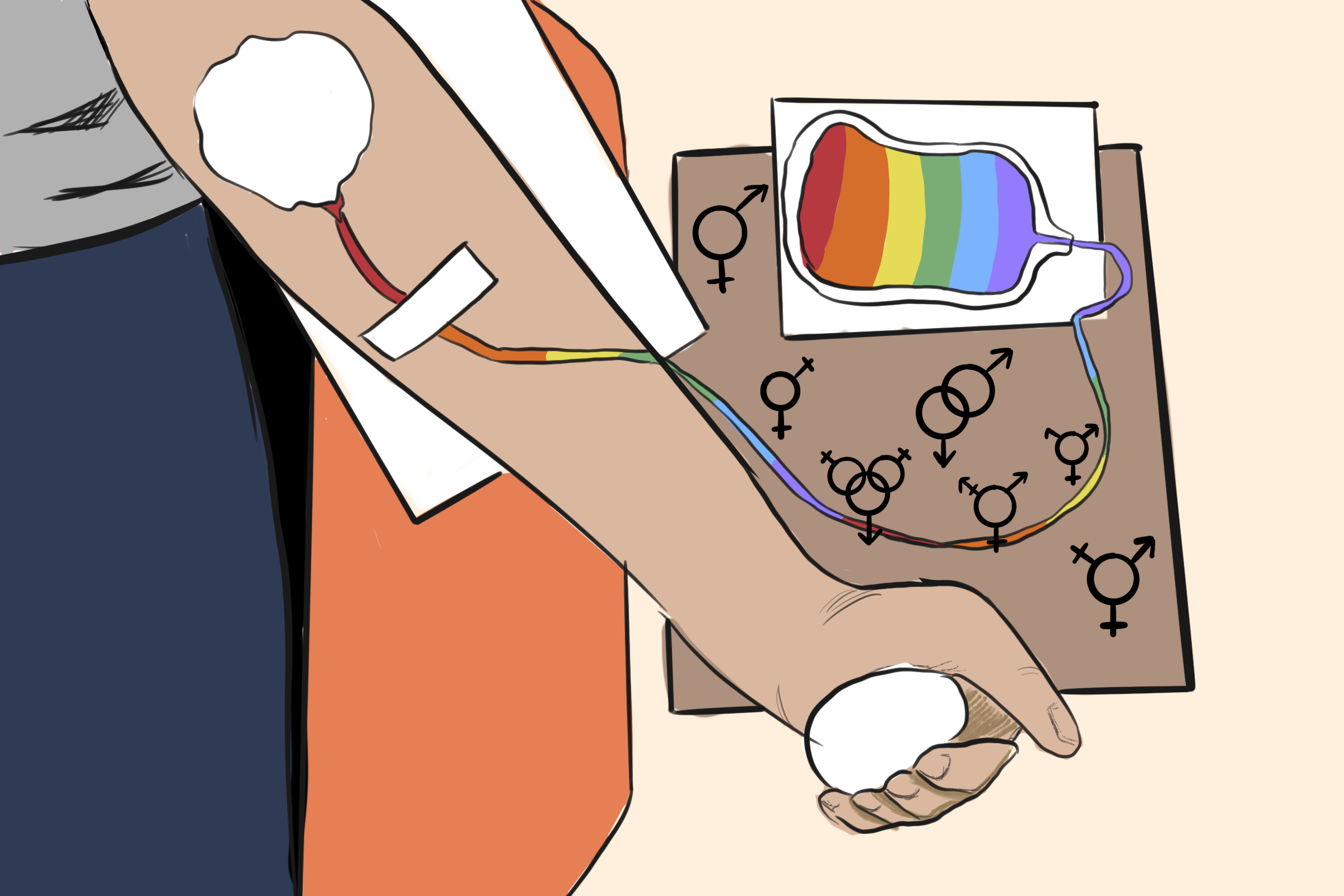 Every November, the University of Michigan hosts an annual bloody battle against Ohio State University in a joint effort to increase the nation’s blood and bone marrow supply. Dr. Martino Harmon, the University’s Vice President for Student Life, leads this initiative through day-long blood drives at various locations on campus most days in November. This year’s battle, the 40th of its kind, was launched in the Diag – accompanied of course by plenty of food, merchandise and registration information. Harmon’s promotional emails are filled with the necessary jargon to entice students to donate – “keep bleeding corn and blue”, “eat lots of iron-rich foods” and “be part of the fight to save lives across the state and country!”

Curiously, the battle cry to replenish America’s blood supply, which is at an all-time high, is not targeting all viable donors. The US Food and Drug Administration (FDA), the agency responsible for regulating blood donations, prohibits all men from donating blood within three months of having sex with another man. This policy is the result of a 2020 change that reduced the deferral period for donations from one year to three months. The FDA notes in this policy that given advances in HIV detection technology, this change is supported. But as recently as 2015, just a few years before this improvement, all men who have sex with men were subject to a lifetime ban on donating blood.

In its guidance document, the FDA says that up to 90 percent of potential donors who may harbor blood diseases are ultimately deemed ineligible by their responses to a medical history questionnaire. However, deferring a man from donating just because he had sex with another man is a gross reflection of the limited, under-researched, and superficial knowledge the FDA had in its toolbox during the HIV pandemic. / AIDS of the 1980s. It is now understood that there does not exist, and never has existed, an “exclusively homosexual-related immunodeficiency”, and any question of eligibility which uses sexuality as a means of preventing all homosexuals to donate blood for a given period is simply based on prejudice and non-science.

As it stands, a gay man in a 40-year monogamous relationship with another man is labeled as a higher risk for blood-borne diseases than a woman who has recently had unprotected sex with multiple partners. This juxtaposition of risk is supported, in part, by nearly decade-old research from the National Heart, Lung and Blood Institute (NHLBI) indicating that a history of sex between men was associated with a 62-fold increased risk. . while a history of multiple partners of the opposite sex was associated with a 2.3-fold increase. But since other activities such as routine drug injection, prostitution, and travel to malaria-prone countries are associated with both great multiplicities of risk and periods of exclusion own, it makes more sense to use individual risk assessments, not general exclusion periods, as a means of determining eligibility to donate blood. Thus, a homosexual who regularly uses drugs and who travels to malaria-prone countries has a higher risk score—and ultimately receives an individual ineligibility sentence that reflects his involvement in these activities—than a homosexual who does not participate in these activities. any other activity of contracting a blood-borne disease.

The key to rectifying this injustice lies in cold, hard data. Most of the available information shows that individual risk assessments, not time-based exclusion strategies, are the right ways to counter the spread of disease in the blood donation process.

It’s clear that the contrived dichotomy between gay blood and healthy blood, a hand-crafted and FDA-insensitive perception, only serves to further stigmatize the LGBTQ+ community. Additionally, giving heterosexuals the green light to engage in multiple forms of unprotected sex (which is a risk factor in itself) and donating blood in the same breath is a double standard, and that people don’t approach in the right way. The half-hearted responses are a major reason the policy is still in effect in 2022.

The UM Blood Battle emails state that “eligibility to donate blood should not be determined based on sexual orientation and a change in policy is needed to achieve this goal. At the University of Michigan, we strive to create as inclusive an atmosphere as possible. These emails refer to the Red Cross — an organization that actively opposes FDA policy — for information on how LGBTQ+ men can contribute to the cause. The primary method by which these men can participate, however, is by manning blood collection kiosks, recruiting donors, and performing other administrative duties.

Frankly, relying on the Red Cross and vague DEI statements about inclusive atmospheres is a mismanagement of our resources here at the University of Michigan. As a research-driven institution, we have the labs, the researchers, and the money to initiate projects that would give the FDA’s Blood Products Advisory Committee compelling evidence that our current understanding of risk assessment is wrong. Instead of depriving entire segments of the population of their ability to donate blood, we should focus on data-intensive individual risk assessments that actually help determine disease risk.

While the FDA is researching alternative methods other than deferment, the University of Michigan has the funds to conduct these same investigations, along with other types of advances in blood testing, the accuracy of assessing risks and origins of false negative donors. Additionally, we must exercise due diligence in conducting research that supports exclusion criteria for heterosexual activities in which there is a similar causal relationship between sex type and infectiousness.

Lobbying, writing letters, or protesting for the FDA to stop choosing what activities are and are not best practices for blood donation is not the tangible change we need. The FDA was created to be a to researchentity led by the US Department of Health and Human Services. The only way to counter their petrified politics is to generate social and biomedical research, areas to which the University of Michigan devotes entire swaths of its campus. For next year’s bloody battle against Ohio State, I believe all healthy blood will be eligible for donation as long as we support the knowledge we have of the incidence of blood-borne diseases with the profile complete risk of an individual, not lazy policies that chain all men to the same deferral duration.