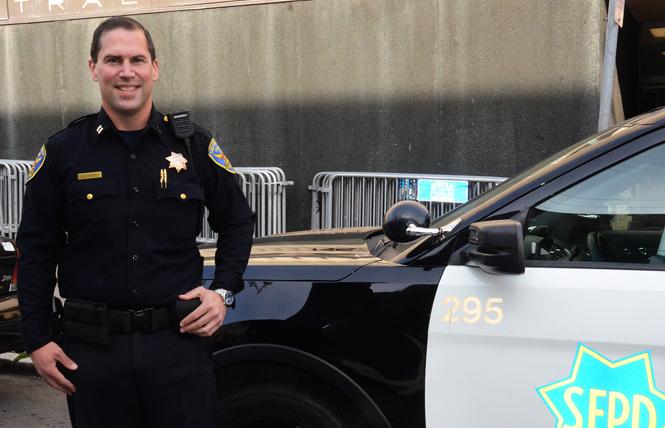 Captain Christopher Del Gandio made history as the first gay man to achieve that rank with the San Francisco Police Department. He is also currently the highest ranked LGBTQ police officer in the department.

Former police commander Teresa Ewins, a lesbian who had served with SFPD for 26 years, held that distinction until she left last year to become police chief in Lincoln, Nebraska. Currently, the highest-ranking LGBTQ person in the department is Matt Dorsey, a gay civilian who serves as director of strategic communications and is on the staff of SFPD Chief William Scott.

In a phone interview with the Bay Area Reporter, Del Gandio said reaching the promotional milestone in the department “feels good.”

“There may have been gay people before me who were successful but didn’t feel comfortable being proud, so I may not be the first,” he noted. “But being openly gay from the start, with the work I’ve done and representing the community and also working really hard in my job to get here, for sure is a big step.”

SFPD Lt. Lisa Frazer, a lesbian who was once a police officer in the LGBTQ district of Castro, hailed Del Gandio’s breakthrough through the department’s glass ceiling in an interview with BAR. She and Del Gandio in 2017 were both promoted to second lieutenant.

“He’s a really nice guy. I’m really glad he’s the first,” said Frazer, who now works at San Francisco International Airport. “This is the highest rank a gay man has been promoted to in SFPD history.”

Del Gandio has undergone training to become a captain and his mission overseeing one of the department’s 10 district stations will become official on Saturday, January 29. As of BAR’s January 19 press deadline, he had yet to be told where he would be placed as captain.

The Teaneck, New Jersey native, who turns 42 on Jan. 22, moved to San Francisco in December 2007 after being accepted into a class at the SFPD academy. He is the first in his family to seek a career in the police.

“It sounds cliché, but I really enjoy helping people and kind of feel like a strong advocate, especially for those who need it the most,” said Del Gandio, a Rutgers University graduate with a BS. in the administration of justice. “I really felt like a call, I would say, to go out there and help people, especially our most vulnerable people.”

He had worked for a small police department in the Garden State as a dispatcher and police department aide. After college, he was employed as a probation officer, and a friend hired as a paramedic in Santa Cruz invited him to visit. They came to San Francisco and, due to Del Gandio’s allergy to cats, he ended up sleeping on a rooftop terrace overlooking the Castro.

“It was a magical moment for me, I really loved this place,” he recalls. “On the East Coast, the only big agency is the NYPD. I didn’t want to stay in New York for the rest of my life, so I thought, ‘Why not make a big change? If I’m going to, might as well do it now.'”

Third promo
This is Del Gandio’s third promotion to the department. After being commissioned as a lieutenant, he was assigned to Mission Station, which is tasked with patrolling much of the city’s LGBTQ Castro neighborhood.

He was then assigned to the Station’s Community Engagement Division before being sent to Central Station, which covers tourist areas of the city like Union Square and Fisherman’s Wharf. More recently, he had been the night shift commander, overseeing the shift.

He had passed his captain’s test in July 2020 and placed ninth in line for promotion once the captaincy became available. Last January, six people on the roster became captain, and now Del Gandio is part of the next group to advance.

“I think by working with the community and the police department, we can move towards a better future,” he said. “I really want to be part of it.”

Sergeant Nicholas C. Buckley, a gay man who has worked with the SFPD for nearly 16 years and is president of its Pride Alliance for LGBTQ officers, worked with Del Gandio a decade ago when they were both assigned to Mission Station.

“I know Chris has done a lot in the department. I know he deserves it so we’re very happy for him,” Buckley said, adding that “the Pride Alliance is very supportive of him and we’re very happy he’s has made this new achievement and I hope he can continue to climb the ranks.”

Gay District 8 supervisor Rafael Mandelman, who fought to fund police academy courses to replenish the department’s ranks, told BAR he was surprised to learn that Del Gandio is the first known gay officer to become captain of the SFPD. He said he had “enjoyed working with him” in the past and looked forward to doing so again if assigned to a district position that covers part of his supervisory district.

“I’m honestly surprised he’s the first and I’m glad it finally happened,” Mandelman said. “Wherever he’s going is historic for the LGBTQ community and it means a lot of positive change at the SFPD. It’s overdue, but it’s a great time for the San Francisco Police Department and for San Francesco.”

Gay state senator Scott Wiener (D-San Francisco) has known Del Gandio for a long time, calling him “awesome” and “just a lovely person” in an interview.

“He’s a hard-working and very community-oriented officer. I’m thrilled for him, for the community and for the city that he’s been promoted to captain,” Wiener said.

There are more than 80 officers in the department, including transgender members, Buckley told BAR, along with a few other officers locked down. Lesbians outnumber gays, although the exact numbers are not known at this time.

“We need more LGBTQ representation to be higher-ranking members of our department,” said Buckley, who became a sergeant in 2016 and at some point plans to seek a lieutenant.

Frazer noted that the department “lost a huge group” of gay men in the early years of the AIDS epidemic. Despite the SFPD’s efforts to recruit new officers from the LGBTQ community over the years, from advertising in LGBTQ publications to holding booths at community events, fewer gay men have joined the ranks than those of agents identified as women.

“Women have always been strong and there are a lot of openly trans officers now,” Frazer said. “But our gay men never caught up with the AIDS crisis.”

Gay men seem to gravitate toward other professions and career choices, Del Gandio said. Some applicants may not pass required drug tests, he added, due to past recreational use at a gay dance event or other gathering where such activity is accepted.

“We recruit from all kinds of different communities; I think we’re really good at it,” he said. “It’s just to get people to sign up. We can recruit whatever we want, but sometimes it’s hard to get buy-in.”

As a young man, he doubted he could be an openly gay man and a policeman, Del Gandio said, which led him to consider pursuing a different career.

“I just decided that I was going to do this – be an openly gay man and represent my community and also do the work that I love,” said Del Gandio, who has been with boyfriend Billy Hackenson for a year. who works in technology. “My experience has been really great in the San Francisco Police Department, I have to say.”