Atlantic hurricane season runs from June 1 to November 30, and NOAA’s Climate Prediction Center says there’s a 65% chance this year will be above average with 14 to 21 storms named, 6 to 10 hurricanes and 3 to 6 major hurricanes.

What does this mean for Dallas? Hurricanes can displace millions of people, and Houstonians and Galvestonians have tended in the past to migrate to Dallas after a hit.

Hurricane Harvey damaged hundreds of thousands of homes in 2017, and a year after the hurricane, 8% of people still couldn’t get home.

Some fled to North Texas and lived in homeless shelters before choosing to make Dallas their permanent home.

But with an already tight Dallas housing market, homeless shelters in Dallas may have to bear the brunt of any evacuated population.

According to NOAA, the increased risk of hurricanes this season is caused by several factors, including the ongoing La Niña. La Niña and El Niño affect hurricane season, but in opposite ways. The terms refer to weather conditions that periodically push warmer waters near the equator into the Pacific either further west towards Indonesia (La Niña) or further east towards South America (El Nino).

The NOAA press release notes several other factors in increasing hurricane risk: warmer than average sea surface temperatures in the Atlantic and Caribbean Sea, weaker Atlantic tropical trade winds and an enhanced West African monsoon – an effect that spawns “many of the strongest and longest lasting hurricanes in most seasons.

“We also haven’t had a robust August-September-October El Niño since 2015, which also helped,” wrote Matthew Rosencrans, NOAA’s senior hurricane forecaster in a response by E-mail. “Over the past 3 years, the outlook has had about a 60% chance of above normal activity, and all of them have had above normal activity. Since 2008, our outlook has been correct (the range of storms named, hurricanes, major hurricanes and total seasonal activity) 67% of the time. 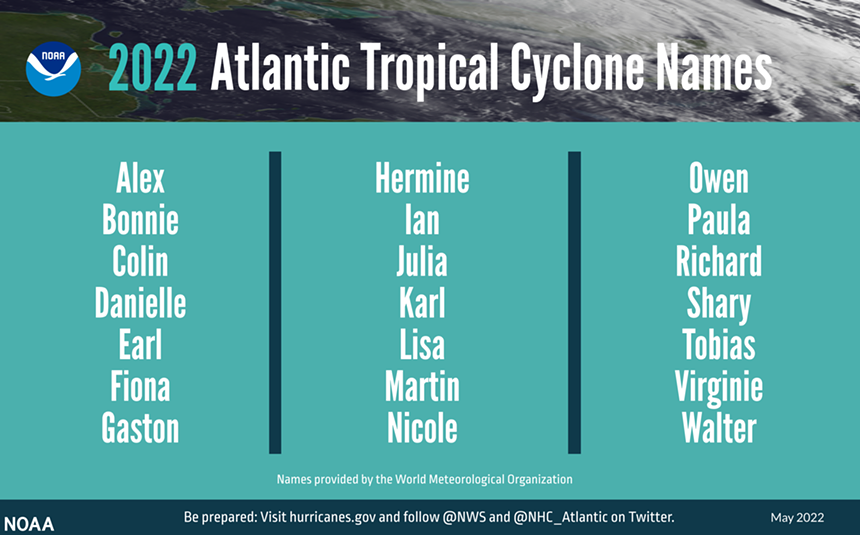 A summary chart showing an alphabetical list of 2022 Atlantic tropical cyclone names selected by the World Meteorological Organization. The official start of Atlantic hurricane season is June 1 and ends November 30.

NOAA Administrator Rick Spinrad said in the statement that the impact of these devastating storms can be felt for years, but forecast accuracy is continually improving, allowing for better predictions of hurricane impacts. major impacts on people’s lives and livelihoods.

The tools NOAA uses to help with their forecasts include supercomputing systems, several forecasting models and systems, surface vehicles, ocean gliders, drones and other aircraft.

But just because Dallas isn’t on the Gulf of Mexico doesn’t mean it’s completely safe. The National Weather Service has a list of 35 tropical storms and hurricanes that have affected North Texas since 1871, the last being Tropical Storm Bill in 2015.

“Almost every hurricane season has at least 1 landfall on the Gulf Coast, and active years have more (on average),” Rosencrans wrote.

“Prepare now by making a plan, updating your insurance, gathering supplies, identifying how you and your family will receive information (mobile phone networks often become unreliable after a hurricane lands ), and maybe even rehearsing your plan. A prepared family is a safer family,” he continued, addressing primarily Gulf residents, but applying to any family on their way to l ‘hurricane.

But even if Dallas won’t be hit by a storm itself, it could see fallout from evacuees from places that are, fallout that could last well over a year or more.

“The past seven years have had a lot of landings, especially along the Gulf Coast with 2020,” Rosencrans wrote. “The biggest takeaways are that more storms mean more chances of bigger impacts, and being prepared now can have a dramatic impact on your safety as a storm approaches.”