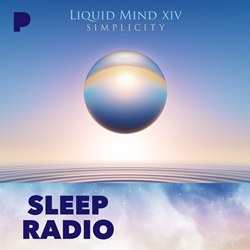 “As many people around the world struggle to access professional help for mental and physical well-being, I hope the soothing Liquid Mind wellness music will help create an atmosphere of calm and tranquility by these difficult times…”

During the pandemic, wellness became a fast-growing genre on Pandora as listeners began to improve their mental health, and Liquid Mind® is the top wellness artist on Pandora. Wild, whose best-selling, downtempo Liquid Mind® albums on the Myndstream label consistently top Billboard’s New Age Music charts, releases his 18th album exclusively on Pandora for one week starting October 10.

Wild will also launch an “artist takeover” of Pandora’s Sleep radio station this week, offering guided meditations and discussing the healing ethic behind Liquid Mind® through a special “mode” of The Station. Takeover: Liquid Mind. Pandora Modes is a unique feature that allows users to customize their Pandora listening experience by choosing from selectable “modes” on their favorite stations to give more control over the songs they hear.

The theme for World Mental Health Day this year is “Mental Health in an Unequal World”, which is fitting since Wild created his music as an antidote to anxiety and stress in the world and to aid in his own recovery of mental well-being. In fact, Wild created Liquid Mind® in response to the panic and anxiety he personally felt during the stressful years of 1987-1990 while composing music for the Emmy-winning TV show Max Headroom®. and at the same time living through the trauma of over 60 of his friends and associates who have died of HIV/AIDS.

“Music is a bridge that unites us,” says Wild, “and I’m proud to release my 18th album Liquid Mind on Pandora’s global platform. As many people around the world find it difficult to access professional help for mental and physical well-being, I hope the soothing Liquid Mind wellness music will help create an atmosphere of calm and tranquility in our difficult times, and will be a benefit to everyone. , no matter who they are or where they live.”

Starting October 17, LIQUID MIND XIV: SIMPLICITY will be released on the Myndstream music label and will be widely available on all audio streaming platforms and on CD at all participating retailers.

About Myndstream: A music company at the intersection of art and science, creating research-backed compositions designed for health and well-being. Aiming to become the most validated and impactful music company in the world, Myndstream leverages its incredible roster of critically acclaimed wellness musicians, as well as its vast advisory network of experts, to create highest quality musical wellness programs. Drawing on the knowledge of its parent company, the award-winning Cutting Edge Group – the leading independent provider of full-service “music for moments” to the film, television video game and advertising industries, marketing music in such high profile productions as Bridgerton, Stranger Things, The King’s Speech, Severance and more – Myndstream’s goal is to create engaging soundtracks for all types of mindful environments and activities.

About Pandora: Pandora, a subsidiary of SiriusXM, is the largest ad-supported audio entertainment streaming service in the United States. Pandora offers consumers a personalized and unique music and podcast listening experience through its proprietary Music Genome Project® and Podcast Genome Project® technologies. Pandora is also the leading digital audio advertising platform in the United States. Through its own Pandora service, its AdsWizz platform and third-party services, such as SoundCloud, the company connects brands to the country’s largest ad-supported audio streaming marketplace. Pandora is available through its mobile app, the web, and integrations with over 2,000 connected products.

Share the article on social networks or by e-mail: